For our final BritRail day we decided to go into London for the day. Austy had been wanting to go to the Victoria and Albert Museum so we structured our trip around that. I had read online that there was a Winter Wonderland even in Hyde Park which is near to Paddington, where our train comes in, so that was added to the list as well. And when we were at Beth's her sister Amelia told us that there was a Rainforest Cafe in London, which really jazzed Libby up so we added that to the list and suddenly had a full day planned.

We approached Hyde Park from the opposite side of the bark from where the Winter Wonderland festivities were taking place. And we had no idea where we were supposed to go. So we started just walking along the perimeter of the park until Libby spotted a ferris wheel in the distance indicating Winter Wonderland's location. And so we found a path that seemed to lead in that direction. We definitely approached it from the wrong side. Because they had to drive all the booths and rides in, the area around Winter Wonderland was rather...well...disgusting with mud and such. It didn't look like Hyde Park but rather like a park that has been neglected by the city. We basically entered in through the back alley instead of through the glittering gates that decorate the proper entrances. 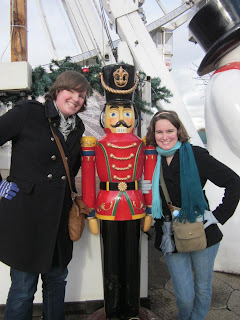 I have to say, walking around Winter Wonderland at 11AM on a Monday was a little bit... eerie. Because most adults are in work and children are in school on week days, there weren't very many people there at all. And this gimmiky Christmas celebration, with its carnival rides,, overpriced food and animatronic moose singing Christmas carols in German, is designed for crowds of people and small children running about. There was none of this., I kept expecting a tumbleweed to go drifting by. Regardless, it was still fun to wander around, enjoying the Christmas music and the overall holiday atmosphere.

After Hyde Park it was off the V&A, which took us a bit to find. On the way we walked by Harrods (in the wrong direction, no less) but it turned out to be worth it. In the windows of Harrods is their recent Christmas display featuring something very near and dear to my heart: Disney. The display of the Disney Princesses is in support of a recent collection of way-too-expensive jewelry, shoes and clothing. All of the displays really were stunning. It reminded me a little bit of Annie Lebowitz famous Disney photo shoots with celebrities and athletes. To see some pictures of the Harrods Disney display, click here. Seriously, do it. It's worth it.

The Victoria and Albert Museum is overwhelming. There is just so much to see that you can't even try to see it all or you'll be sorely disappointed. We chose a few things that we really wanted to see, which I think was the right way to tackle it. We started at the fashion exhibit which was really cool because it documented fashion trends from the olden times until the 60s and today. It was a lot of fun to look at the different styles and laugh at some of the especially strange ones. In the area where the fashion exhibit was the ballgowns exhibit which we didn't see because it costs upwards of £20 and we were not about to pay that. As we left the fashion exhibit we found that we didn't even need to, because once we walked upstairs you could see the entire top floor of the ballgowns. So that was an awesome discovery.

We also saw the Raphael Cartoons which are massive tapestries made or supervised by the great Raphael himself , depicted scenes in Christ's life. They really wore magnificent and were designed to be viewed sitting down and soaking in their details and beauty. We looked at some ironwork on our way to another art exhibit and ended our tour of the V&A in the jewelry room which was... wow. The actual room was designed to almost look like a sleek high class club or lounge. It seemed to me that it would be perfect place to hold cocktail parties or other important events. And of course the actual jewelry was beautiful and a perfect way to end our quick tour of the Victoria and Albert Museum. 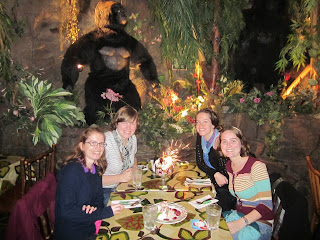 After the V&A we were off to the Rainforest Cafe where we decided to merely indulge in dessert since its pretty dang expensive. And after all, you don't really go to the Rainforest Cafe for the food, you go for the awesome decorations. And it did not disappoint. We sat right by a moving gorilla and experienced two thunderstorms. And with Libby geeking out next to you its pretty hard not to enjoy it. We got the Volcano sundae, which turned out to be strawberry ice cream, brownie and whipped cream. I'm not the guest fan of strawberry ice cream, but it was still pretty good, and fun to eat since it comes in massive bowl. We also had the Eton Mess Cheesecake which wasn't as good as the actual Eton Mess that Beth made for us, but was still delicious.

Our final stop was a place that is becoming my favorite place in London: Covent Garden. This is the fourth time I've been to this area of London and I always enjoy myself when I go. This time we were there to visit Hope and Greenwood, a candy store Caitlin, Austin and I went to a few weeks before. But we wanted to show Libby (and get more Cherry Bakewell sweets). After Caitlin got Cherry Bakewells last time, we'd all become obsessed with the. Seriously: all four of us got some on this trip. We each chose a different flavor to get as well: Austin got Ginger Beer, I got Lemon Meringue (since I'm in love with meringues) and both Caitlin and Libby got Birthday Cake. 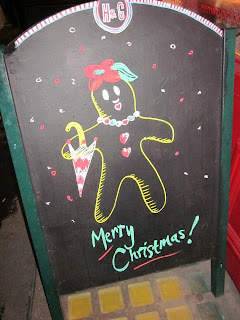 After we had chosen and paid for our confectionery, we had a nice conversation with the man who was working. Upon inquiring what brought us to England and where we were studying, he revealed that he studied at Oxford Brookes when he was a student "a long time ago." Though I would like to point out that this guy didn't look like he could possibly be older than his twenties, so he had to have been exaggerating. After explaining that this was a place Caitlin visits every time she comes to England and talking about various other things like what his favorite candies are, he asked us if we wanted to try any other flavors so we would know what we wanted next time we came in. When Libby said she'd be interested in trying Summer Festival, he began to get one out, and then decided to just give us enough so we could each try one. He then popped into the back to get some of the new stock they just got in: Rose and Lychee. He then proceeded to grab some other candies, enough for each of us, and create a bag of all of his favorites.As we walked out of the shop we couldn't stop smiling. It's moments like these that I have loved about being abroad: the unexpected kindness of others.

After this excellent ending to an amazing day, we hopped back on the Tube and got onto the next train, pleased with everything we've been able to do with our BritRail passes.