As my time here in the UK winds down, I've been thinking about what I will miss the most about being in the UK and I couldn't help but think about the fashion.

One of the aspects of English culture that I would most like to bring back home is the fashion. I am fairly conservative fashion wise—both in the sense that I only really ever wear clothes that my grandmother wouldn’t be offended by and that I don’t really tend to take very many risks—so I don’t really mean the London fashion scene but rather the tendency to always look polished and presentable. I don’t own any sweatpants, I own a total of three pairs of yoga pants (which I rarely ever wear out of my apartment or house), I can go weeks without wearing tennis shoes (or trainers as they’re called here) and even though I buy t-shirts when I go on vacations and trips, I don’t find myself wearing them very often. I like cardigans and nice skinny jeans and skirts, and I love wearing boots and flats. I’m just not really a casual dresser. Here in England, I have noticed that people tend to look more put together on a daily basis. You don’t really see that many people wandering around in sweats and a hoodie and it isn’t often that you notice that someone clearly just rolled out of bed for this class. And I’m not saying that I think that everyone should spend hours in the morning looking the best they possibly can—I don’t wear makeup, I don’t spend any more than a minute on my hair any given moment, and I usually get dressed in under 5 minutes. It’s really just all about the actual clothes that a person decides to wear any given day. It seems as though the English are less likely to look out the window, say “It looks yucky out, I think I’ll just wear sweatpants today” than Americans are.


I was speaking with some friends here about fashion and differences between American and English clothing and one of them asked about what guys tend to wear in America. We answered that usually guys will be seen in jeans and a t-shirt, maybe a polo shirt. I then commented that you wouldn’t normally see guys dressed as nicely as Dan was: a light purple button down rolled up to the forearm, nice jeans and really nice leather shoes. Our friend Beth laughed and said that for Daniel, this is dressing down. I think this highlights the difference between home and here.


One of the things I noticed first about Beth is that she always looks put together. Whether its her shoes, or her cute coat or just a scarf, she never looks like she just threw something on so that she could leave the house. It seemsas though she dressed for a purpose, and I like that about her. And I kind of want to steal all of her clothes. And I feel that way about a lot of people I see walking in the street.

Twp things I really want to get are a tweed blazer and something with elbow patches. Really, preferably I'd like a tweed jacket with elbow patches, but I won't be too picky.I have acquired some new clothing since I've been here.  I got an interestingly patterned sweater skirt, a Union Jack skirt, a nice shirt with bows on it (I'm obsessed with bows!) and a fun striped sweater with a few different patterns such as dark maroon and teal with colorful speckles. This isn't something I would normally wear, but that's part of why I got it. I wanted to go a bit out of my comfort zone, and now I love it.

My friends and I have a joke here--if you've ever wanted to try some crazy fashion statement out, do it here in England where it's accepted. People wear some of the most random things here, and it just seems to work. So now is our time to test the water. . This is our change to pioneer a new style! Because if we go home and people look at you strangely, you can just say "I studied in England this semester, and this is all the rage there". Just kidding, of course. 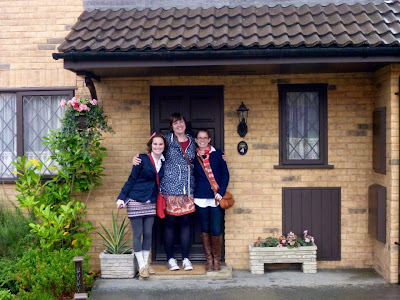 One sort of risk I took (a risk for me at least) is illustrated in this picture. For starters, I am rocking so many layers: you can't see it, but I'm wearing a blouse, a cardigan and a blazer. And a skirt and tights. Another fashion statement I contemplated a lot was the socks. I'd gotten these cute socks at Primark because I needed higher socks for my boots but it occurred to me that I could wear them with my Sperry's over my leggings and that would be really cute because of the classic English design on them. I don't really know if it worked or if everyone thought I was an idiot, but I just owned it and that's all that mattered.

But what it all comes down to is that I personally love when people dress nicely. Over the summer, I had expressed to my friends that I wanted to focus my personal style more towards looking “smart” (not in the sense of intelligence but rather in the sense of put-together). And I came to England to find that the style I’ve been trying to make my own is exactly the trend in England. So, as you can imagine, I was pretty pleased about that. I still wear jeans, of course, but this past month I have found myself in dresses, skirts, cardigans, blouses and blazers much more than in years past, and I don’t stick out because of it. I do think, though, that if I were to go back to America and just go to hang out with friends in their apartments continuing with the style I have solidified while here, that I may look a little overdressed, so I would really like the tendency to dress nice all the time to come to America.