Expectations Are a Funny Thing


I was expecting so much out of our recent trip to Winchester and what I got was pouring rain, a waterlogged boot and a Christmas Market without power. So yeah, not what I was expecting. But that's not to say that it wasn't a good trip; it was certainly an adventure.

We made plans to go to Winchester for our 7th BritRail day. I'd seen online that Winchester was supposed to be an amazing city around Christmas and even my Mom knew that when I mentioned to her that we were going there for the day. I have to say that the Christmas Market really let me down. But that could have been because the power was out and without Christmas music playing it was hard to get into the spirit. I'm not entirely sure what I was expecting, but it wasn't this. And add in the rain, and it was a bit of a disappointment.

Oh, the rain. It rained all day, never letting up and I discovered that there was a gab between the bottom of my shoe and the sole and therefore my right foot because soaking wet. For a while there it felt like my socked foot was walking in a puddle, there was so much water in my boot. "Step, splish, step, splash," I walked through Winchester. Remind me again why I sent my rain boots home with my parents? Despite my submerged right foot, I quite enjoyed the time we spend wandering around the sites of Winchester. 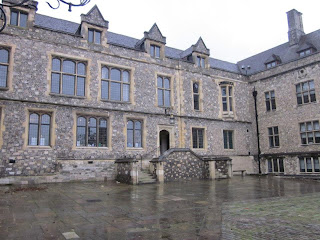 We started at the Winchester Castle Great Hall where King Arthur's famous round table is kept. I walked in, quite confused. It was just an empty room. "The Round Table is supposed to be quite large," I thought, "so where is it?" Then I discovered the problem: I was expecting (those pesky expectations) for the table to be set up like an actual table,a proper table. But no, the Round Table was hanging on the wall. Mystery solved. I guess it makes sense because this way we could truly see the whole table at one time.

Also in the Great Hall is a gate given in honor of Prince Charles and Princess Diana. Pretty much anywhere you go in England you can find places named after or built in honor of the royal family. You just can't avoid it.

While buying my Great Hall postcard the man at the till saw my Sherlock Holmes button from 221b Baker Street and told me about a Sherlock Holmes book set in Winchester. I love when locals share interesting facts or trivia about the area that isn't readily available or highlighted in guidebooks or on TripAdvisor. 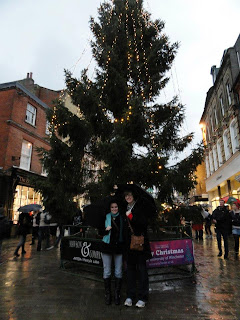 Then we were off to the Christmas Market at Winchester Cathedral. As I said before, I was let down my the Christmas Market pretty much the moment I saw it. It just seemed... smaller than it seemed like it should be, and they weren't even selling that much Christmas goods. It was crowded, yet quieter than it should be. But there is a bright side to every situation: I did get some delicious hot cocoa with The Works: whipped cream, a Flake bar and marshmallows. My sweet tooth thanked me for that.

Once I'd finished and disposed of my cup, we left the cathedral close in search of Wolvesy Castle--some ruins that are supposed to be quite interesting. We thought that if we just took this one road and then this one that we would eventually find it. Nice try, Amy. (I'd actually printed a map of Winchester out in prepration for this very moment but of course I forgot it. What a waste of 5p.) We couldn't find Wolvesy but we eventually found ourselves back on the main road so we were able to find our way from there. We found a sign for Wolvesy Castle pointing along the river. A walk is always better when it's along a river. Unless it's absolutely freezing, I suppose but luckily, although it was raining, it wasn't too cold, so it was a pleasant walk. Also--walks always seem shorter when they are along a river as opposed to on the road. I wonder why that is?

We got to the castle ruins, read the information sign and found that the castle grounds were closed for the day. This was a bit of a bummer--nothing really seemed to be going quite right on this day trip. Just down the road is Winchester College, which is the longest continually running school in Britain. We didn't get to go in because you have to do so on a tour which were weren't in time for (and more realistically because you have to pay for it  which we did not want to do) so we peeked in and went on our way. We walked back through the cathedral grounds (which was actually quite beautiful) and onto High Street to get some food.

All I wanted was some soup on this rainy day and as we walked into a cafe I knew that something was finally going to go my way. The cafe looked like your typical way too brightly lit sandwich shop but when we ventured into the downstairs seating area it was quite cozy: an array of tables and filled with comfy couches. It had fun city themed decor and surprised me as a great place to hang out and escape the rain.

After lunch we tried to find an indoor Christmas market we were handed a flier for earlier before we had to get back to the train station. However, because we didn't have a map we couldn't find it. I'm sure it was just a few steps further than we went but I suppose it wasn't to be.

We got back to the train station to find that our train had been cancelled . We've taken the train a lot and this is the first time this has happened to us. We didn't really know what to do. After looking at each other bewildered for a few moments, we shook it off and started looking for Plan B. We got in the ticket line and when it was our turn, I had a less than pleasant conversation with the man at the booth.

"Hi, we're trying to get back to Oxford and our train was cancelled. What route should we take?" I asked.

"Take the 18 after and change at Basingstoke and Reading," he replied, speaking very rapidly. And that combined with his accent, I didn't fully understand him, and when it comes to train stations, you can't just nod along and hope you heard correctly.

"Pardon? Can you repeat that?" I requested.

He sighed. "Take the train that leaves at 18 past four and change at Basingstoke and Reading," he said, as if I was an idiot. Now this is an unfamiliar route for us so I wanted to be sure. And the way you confirm that you correctly understand something is repeat back what they said they way you understand it. So that's what I did.

"So we got off at Basingstoke and then get on a train to Reading. And at Reading, we get off and catch a train to Oxford?" I confirmed.

His response? A rather rude "that's what I said, isn't it?"

This is probably one of the only off putting interactions I've had with a British service employee. Well, it was bound to happen eventually.

As we tried to locate the mysterious 4:18 train we discovered why our train was cancelled: crew shortage. I think this is the lamest reason ever for transportation to be cancelled. Did someone just not show up for work? Don't you have stand-in employees? Austin rationally pointed out that it's possible that the missing crew were supposed to get to the starting destination of our train on trains that were cancelled due to flooding because of all of the rain. Okay, good point Austy. I'll give you that one.

Anyway, even though we had to take three different trains, had to run to make our train to Reading (during which I lost my umbrella) and had to wait 30 minutes at the Reading station, we only get home about 20 minutes later than we would have had not been cancelled. And that's the beauty of train travel.

So, my day in Winchester wasn't exactly what I thought it would be, but it was fun, especially seeing a new city. And the city really was beautiful. Many of the buildings were made of what appeared to be brick and a smooth, semi-transparent glass like stone, combined. It made the buildings look so interesting and your eyes couldn't help but dance when you looked at the wall. I have to admit, I was overly fascinated by the buildings. I thought they were totally awesome and I'm so glad I got to see Winchester because of them. So, I can't complain, can I?